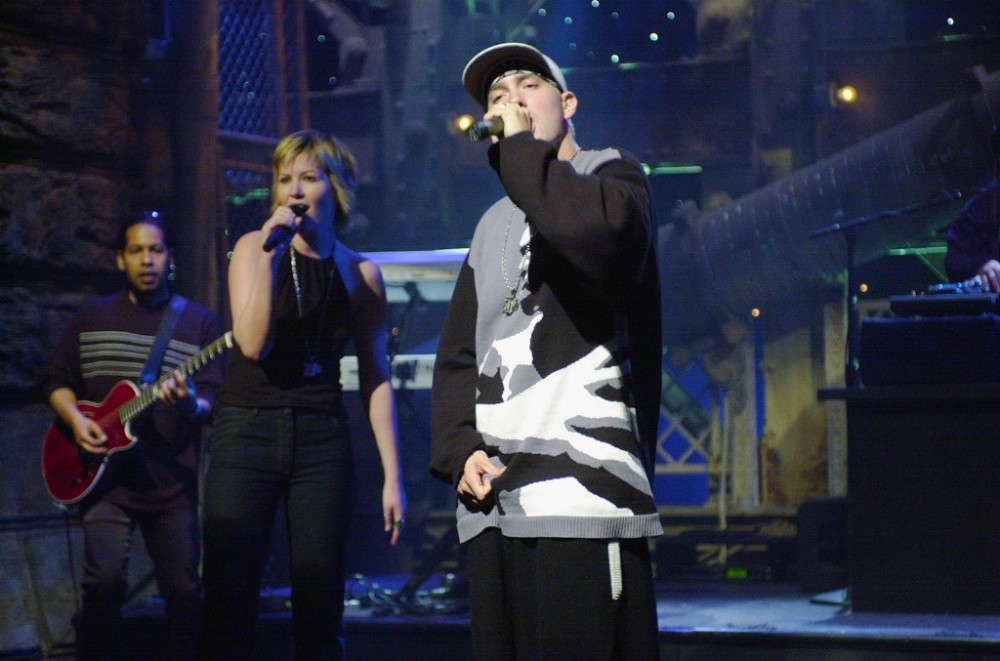 Following our Billboard staff-picked list of the 100 greatest songs of 2000, we’re writing this week about some of the stories and trends that defined the year for us. Here, we look at the notable songs from 2000 that gave us a glimpse at some of the places pop music would be going a little further into the 21st century.

The year 2000 was undoubtedly a banner year for the recording industry: boy bands and teen divas continued their late ’90s dominance, rappers and rock bands were releasing albums that would eventually go diamond, and despite file sharing becoming a hot-button issue, revenue was nearly as high as ever.

Obviously, nothing from that last sentence held up much longer. But plenty of noise from the year 2000 resonates today: in the sound of the Top 40 and Spotify charts, in the way we consume music, in the way we use it to make sense of the tumultuous world around us.

Here are 10 songs that twenty years ago uniquely predicted the sounds of today.

Slim Shady’s biggest fan might have been scribbling his letters on looseleaf, but “Stan” eerily prophesied the perils of the coming social media age. What happens when a celebrity’s most obsessive followers are connected broadband armies instead of the postal service? And of course, Em gifted us the convenient slang term — a portmanteau of “stalker” and “fan” — that’s literally been added to the Oxford English Dictionary.

Peak-era Hov power-brokers a lavish North-South team-up — the most successful hip-hop had seen so far — by inviting Houston rap legends UGK onto one of Timbaland‘s most irresistible beats and straight into the national spotlight. Regional barriers mean little in today’s game — much of that can be traced to whatever device you happen to be reading this on — but by calling up Bun B and Pimp C, Jay-Z did as much as anyone to assure hip-hop wouldn’t be left in the dial-up era.

After “Macarena” and before “Gangnam Style,” “Harlem Shake,” and “Baby Shark,” there was this prime piece of millennial meme-pop, which managed to go viral before social media even existed. Instead of a quick ascent on Twitter or TikTok, “Who Let the Dogs Out” rose to prominence over numerous months by some improbable combination of children’s birthday parties, stadium DJs, and the soundtrack from Rugrats in Paris: The Movie. There was no dance to learn or movement to get behind, just a lot of chanting and, as it turned out, a knotty backstory of thirsty Anglo record execs trying to co-opt Caribbean music.

As a Santana single, “Maria Maria” arrived on the mighty heels of “Smooth” and not only managed to avoid becoming a ubiquitous meme, but topped the Hot 100 for almost as long (12 weeks to 10). The legacy of Santana’s team-up with the Wyclef-endorsed R&B duo does deeper than that, though. By proving “Smooth” was no fluke, “Maria Maria” legitimized the concept of a lead artist assembling an army of all-star guest singers across an album, even if they didn’t sing a lick themselves. It all came full circle when the iconic “Maria Maria” guitar solo was sampled 17 years later on “Wild Thoughts,” a top-five smash appearing on an album from… noted artist organizer DJ Khaled.

The line between country and pop is delightfully fuzzy these days: Kelsea Ballerini can duet with Halsey, Kane Brown is free to bro down with Marshmello, and arguably the biggest smash of the post-EDM boom is largely remembered as a Maren Morris song. Nashville’s crossover appeal has deep roots in the Y2K era, led by LeAnn Rimes‘ girls-night-out anthem from Coyote Ugly. If you didn’t know better, you’d think the swaggering diva behind “Can’t Fight the Moonlight” was some Cher or Britney disciple, not a Nashville staple with numerous country hits.

When Blueface went viral with “Thotiana” in early 2019, the L.A. upstart’s willingness to rap offbeat was at the center of the hype. But this sort of flow is far from new; old heads will point out ’90s trendsetters like E-40, but you don’t even need to go back that far to hear flows going rogue on massive hits. On Mystikal‘s “Shake Ya Ass,” the NOLA MC went top 20 on the Hot 100 by wiling out over a classic Neptunes beat, abiding by rhythm and structure about as much as Bourbon Street after dark.

Twenty years ago, former drama teacher Merrill Nisker — aka Peaches — dropped a raunchy electroclash rager that’s still running circles around most anything the pop game is trying to pass off as “sex positive.” Peaches lets you know what’s up right away with her iconic opening come-on, then goes on to shout out IUDs before drawling the song’s title ad infinitum over frothy acid-house beats. Her onstage look was somewhere between modern burlesque and her old drama school gig; without her, it’s hard to imagine what Lady Gaga would have dressed like by the end of the 2000s or what Charli XCX and her avant-pop cohort would have sounded like by the end of the 2010s.

Today, expecting reggaetonaeros like J Balvin and Bad Bunny to perform in English is almost as ridiculous as writing off Latin pop’s American stronghold as a passing trend. But during the Y2K era, the scene was quite different: stars like Marc Anthony and Enrique Iglesias were crashing the American pop charts like never before, but their Hot 100 smashes were sung almost entirely in English. Unlike “I Need to Know” and “Be With You,” Son By Four‘s “A Puro Dolor,” didn’t need English lyrics to be a Stateside hit; in 2000, the Puerto Rican group’s iconic heartbreak ballad cracked the Hot 100 at No. 65. Though a translated version — now called “The Purest of Pain” — later became a bigger hit, a breakthrough statement had already been made.

At the dawn of the millennium, superstar features were nowhere near as common as they are today. Rappers and pop stars looking for an extra boost on the charts were learning the ropes, but the practice was still looked down on by cooler-than-thou rock and alternative artists.

Then came one who knew he wasn’t cool. Moby‘s platinum-certified Play was already a rousing success by the time he was choosing its seventh single, but a Top 40 hit still eluded him. So Moby dusted off a previously-shelved version of “South Side” featuring No Doubt‘s bombshell leader on backing vocals and watched the it sail to No. 14 on the Hot 100. Not only does the brooding alterna-pop duet sound like something you’d hear all over Sirius Alt Nation these days, the phrase “Moby featuring Gwen Stefani” gives hope to sad-sack studio rats everywhere.