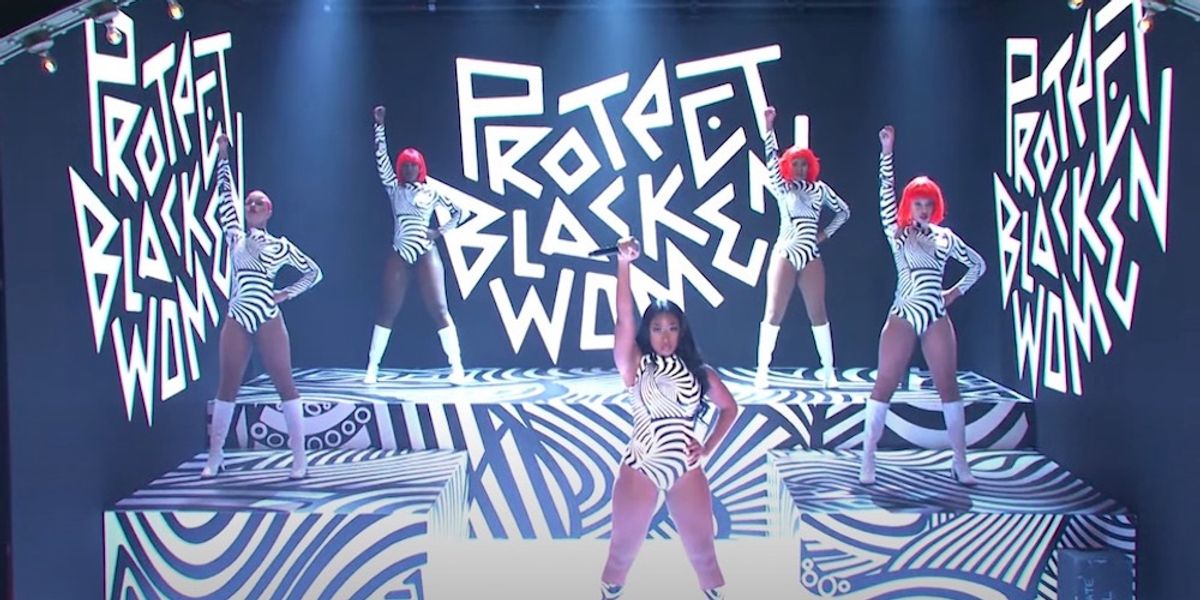 Saturday Night Live’s season premiere this past weekend saw Megan Thee Stallion use the platform as a call to action. During the performance of her hit single ‘Savage,” the Houston rapper briefly veered from the song’s braggadocious energy to bring attention to a real issue. Sound bites of Malcolm X’s quote about America’s disrespect towards Black women and activist Tamika Mallory condemning Kentucky’s Attorney General Daniel Cameron for his handling of Breonna Taylor’s murder accompanied Megan’s proclamation. That proclamation? “We need to protect our Black Women.”

Through no fault of her own, Megan has indirectly become the face of violence against Black Women. She was the victim of gunshot wounds to both feet after attending Kylie Jenner’s pool party in July. In August, she revealed that it was Tory Lanez who shot her allegedly. Her accusations on Instagram Live were a cause for speculation. There had been rumblings on social media that Tory was the shooter, but now Megan’s believability suddenly came into question.

Megan’s situation is a recurring narrative that exists in Hip-Hop. Black women have had to bear the brunt of misogyny and disrespect at the hands of their male counterparts. In the form of abrasive lyrics, the presentation of women as objects in music videos, and failing to use their male privilege to act as advocates, Rappers have also perpetuated the disregard for the safety of Black Women. This attitude, like most of Hip-Hop culture, is the spawn of a much larger societal issue.

According to the National Coalition Against Domestic Violence, 41.2 percent of Black women have experienced intimate partner physical violence in their lifetime. An estimated 51.3 percent of black adult female homicides are also a result of DV. Megan and Tory didn’t publicly admit to being in a relationship. But the way they kept each other company before the shooting and with Tory ambiguously referencing the situation on his latest album, ‘DAYSTAR’, a romantic connection isn’t too far fetched.

Black women are often the subject of hate and ridicule when the focus is on their craft as well. Over the summer, Megan and fellow femcee Cardi came under fire for the salacious song and visual to their collaboration “WAP.“ The response to “WAP” saw Cardi and Megan labeled as deviants and smut peddlers instead of talented, successful women embracing their sexuality.’While some defended Cardi and Megan’s right to showcase their “assets” unapologetically, Many felt that their display was the end all be all to moral decency.

The backlash that “WAP” received wasn’t just because of its sexual content. There have been other instances where a Black Woman entertainer became a target for her views. In 2016, Beyonce sent the far right into a frenzy with her Super Bowl Halftime Show Performance. The pro-Black imagery and presumably “militant” energy saw the likes of Tomi Lahren attack Beyonce for using the NFL’s biggest game of the year to let the world know Black Lives Matter.

Black women are also victims of being mocked for their identity and style, only for them to be praised and mimicked when taken on by women of other races. The term “Blackfishing” has become a topic of discussion in and of itself. Non-Black women pretending to be Black Women to gain access to predominantly Black spaces has become a growing trend; Rachel Dolezal and Jessica A. Krug are two examples. Dolezal’s misrepresentation led her to become a chapter president of the NAACP, while Krug’s perpetrating left both her students and colleagues at George Washington University hurt and confused.

“Protect Black Women” isn’t a rallying cry for the sake of performative activism. It’s a statement that encompasses the overall need to defend Black Women in every capacity. Whether it’s an ER technician from Kentucky or a platinum-selling rapper, the guardianship of Black Women’s safety needs to be a priority. Their contributions to pop culture and civilization are vast and priceless.